shouldn't the ingredients in cinnamon be... CINNAMON?!

I'd classify myself as quite a fervent label-reader.  There's not much I pick up without scouring the ingredients, not just to avoid animal products, but also nasty chemicals, colors, and hydrogenated oils.

But, I've never thought much about checking the ingredients on spices.  I mean, they're herbs and spices, right?  So, when you buy dried oregano, it should be oregano.  Ground cumin should be just that - ground cumin seed.  And cinnamon... coming from those delightful sticks of cinnamon, should be just cinnamon, right? 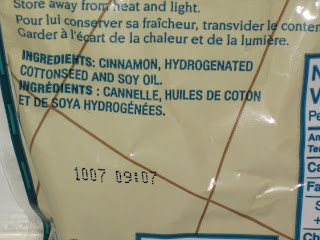 Well, not always, folks.  Check out this label from a common brand of spices found at our local grocery store.  Ingredients: cinnamon, hydrogenated cottonseed and soy oil.

What the...?   Honestly, I have never before looked at the ingredients in my package of cinnamon.  I had asked hubby to pick up more cinnamon while he was out stocking up on avocados, and just happened to look at the back of the bag as I was transferring some into my spice jar.

Now, I realize that the amount of hydrogenated oils that we would consume from the amount of cinnamon used in a recipe is minimal.  But, that's not the point.  It doesn't need to be in there!  I'm assuming it's included to preserve the spice over a longer shelf life, which makes me think it's not a brand to buy anyway if it isn't particularly fresh and aromatic!

Soon after, I checked out the spices at our local health food store (Choices), and their line of spices did not include any nasties.  One brand didn't show an ingredient list, so I e-mailed the company.  They assured me that their brand includes no other ingredient other than the spice or herb itself.  Also, their products aren't irradiated (yet another issue).  Yes, this brand is slightly more expensive.  But you know what?  I'm willing to pay the extra buck not to have my food - whatever the ingredient - be tampered or toyed with.

So my darling readers, as we hear all the time... read your labels - even for the seemingly obvious things!


There are virtually no nutrients in animal-based foods that are not better provided by plants.  "Principle #3", The China Study

I've never been much of a label reader. Then the other day for some reason I started researching the effects of food dyes and what the dyes are actually made of. Yuck!

Needless to say I've started looking at labels a little more closely. I had no idea so much of our food was tampered with. What ever happened to fresh foods? And do we even know what the true effects are from putting all this extra crap in our bodies?

I couldn't agree more with your last statement. Read your labels!

Ew! I'd never thought to check spices either. Now I will! Thanks for the heads-up.

Wow - that IS something!! Thanks for sharing. That's so weird.

Ha, I'd recognize that "nasty" label ANYWHERE! I remember checking out the label on some chili powder of theirs that my mom had kicking around, left over from eons ago...needless to say, I did not make chili that day!

The weirdest thing I discovered like this was partially-hydrogenated oil in a MULTIVITAMIN I used to take! To quote one of my friends, "I take vitamins to be healthy, not to consume trans fats!" It's amazing what "they" stick in stuff!

That is unbelievable! I would never think to check a spice label either!

I see this all the time. I is very strange.

I just noticed the other day my garlic salt wasn't just garlic salt :) I didn't think to check the spices. Crazy!

That is a bit freaky - since going vegan recently I have been checking labels quite a lot, but you would think you'd be safe with cinnamon!

Try Penzey's spices. They are amazing! :)

As a person who uses spices for baking on a regular basis I am shocked to hear this! I am definately going to have to take a closer look at my spices in the future

Thanks for the heads up

It really does help to read labels, because you are scouring for what is really inside. That is interesting that you found additional ingredients in spices, how weird! I will keep an eye out for these now. Thanks :)

Wow! Great post - I would never in a million years have checked the back of a spice packet.....I will be from now on though! Makes you think.....thanks so much for posting that!

Ew! Gross! Yuck. This is why I typically read the labels a lot on food that seems over-processed or unusually unhealthy. It's crazy what kind of things they can fit in to some recipes, but cinnamon? Really guys? That's just silly, I absolutely agree!

I'm a Celiac so I read labels on a regular basis. However, I've never seen spice labels like the one shown. I'll have to be more careful. Thanks for the heads-up.

Thx for that piece of advice. Gonna check my spices next time I buy! :D

Thanks for this awareness!

It boggles the mind as to why they feel the need to mess with such simple ingredients/products!

This is a clear example of why it's important to always check food labels. You want to make sure you're getting exactly what you think you're getting. I certainly would want to know if I'm getting an all-natural product or something with additives!

As a vegan who recently discovered that I'm extremely allergic to both soy and soy-derived products, the possibility of soy oil appearing in spices put even more fear into my label-reading heart than was already there. When I asked the folks at my hfs about this, I was told that standard grocery store brands of cinnamon, in particular, were susceptible to this ploy since a high percentage of CINNAMON oil is a sign of a more aromatic product. Apparently, they assume the average customer will notice the higher percentage of total oil, but not the fact that it's been bulked up, so to speak, with soy oil...

I know you have to think ahead, but I always order my spices from Mountain Rose Herbs. Cheap, Fair trade, organic, any amount you choose.

Sometimes I have to buy from Whole Foods or something, but yikes, I hate that places to that! Put more ingredients than one in a spice!