You read that right, that's nipple, not ripple!  Bit of a racy title, but for good reason.  I heard about this story a week or two ago and have been eager to post about it.  An ice cream parlor in London has quite a scoop, with a new ice cream made entirely of human breast milk.  It's called "Baby Gaga", and sells for $23 a pound. 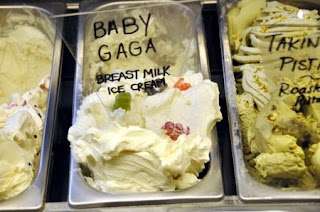 Before you recoil in disgust, think about what "regular" ice cream is made of... milk from cows.  When you think of it, that's pretty vile.  Would you go out to a pasture (mind you, dairy cows are NOT in pastures, they are confined in treacherous factory farms) and start suckling from a cow?  That idea is a turn-off, but we regularly consume the milk from these animals, in forms of cheese, yogurts, milk, and more.  What's worse is this milk is ridden with antibiotics, hormones and more.  Gross enough for you yet?

Listen, I wouldn't line up for the breast milk ice cream.  I'm an ice cream lover, but will happily choose those churned from milk of coconuts, rice, or other plant foods, thank you very much!  I just think it's ironic that this creates such buzz and shock when you think of the dairy that is mass-consumed everyday, without thought.

One other interesting note is that apparently the ice cream was temporarily seized by health officials because of safety concerns.  Granted, there might be issues here (though supposedly the milk is pasteurized), but I'm thinking shouldn't officials be more concerned about the health concerns linked to consuming cow's milk?!
Posted by Dreena

I am with you on this one. I'm not going to eat it, but I am quite amused by how SHOCKED folks are! It's breast milk, people! Get over it :)

God forbid anyone find out we sometimes don't make the bed in the morning. geesh! ;)

I will totally admit I was a little shocked... although I do agree that its something that shouldn't be so shocking given what else ppl consume.

Although that being said... it made me wonder who's donating to this? We know that things women eat and consume can affect their milk (ie alcohol) ... so what could be lurking in the baby gaga?

The ice cream is selling out regularly. The council took some for testing and it came back clear.

Does breast milk count as vegan? ;)

oh boy... I read about breast milk cheese, but ice cream... both are pretty weird in my books!!

"I wouldn't line up for the breast milk ice cream. I'm an ice cream lover, but will happily choose those churned from milk of coconuts, rice, or other plant foods"...exactly what I told my grossed out nonvegan sister when she heard about the UK shop!

Wow. That is pretty far out. I am sure it's not the worst thing out there to eat. Interesting. I am not going to try...but interesting.

Great minds think alike. I was just saying that the other week when all this went down :P

Hopefully though, it has made a few people think about their consumption of cow's milk and how downright weird that is....

Well said!!! Now excuse me as I run to the store for some Rice Dream.

Truthfully, I don't think it's that weird. When I heard about it my first thought was whether or not it was pasteurized breast milk. My family was quite grossed out, but I explained that women donate their breast milk for other women's babies but it's tested and pasteurized first. That's actually more than is done for cows milk. Each bit of cows milk isn't tested like breast milk is! Then I thought about how tasty breast milk icecream would probably be... especially if the person were vegan! haha Breast milk is super sweet, believe me, I've tried it!

No thanks, man. I am all about coconut bliss.

This creeps me out, because it seems awfully intimate. I'm not so into coming in contact with the bodily fluids of strangers.

It was fun to read all of your ideas and thoughts on this post - thanks!