It's been almost a year since I posted here!  Why?

Well, I definitely wasn't taking a blogging vacation.  No, I've been blogging at Plant-Powered Kitchen. I'm there - but you aren't!  I realized recently that 1000s of you are missing my posts. 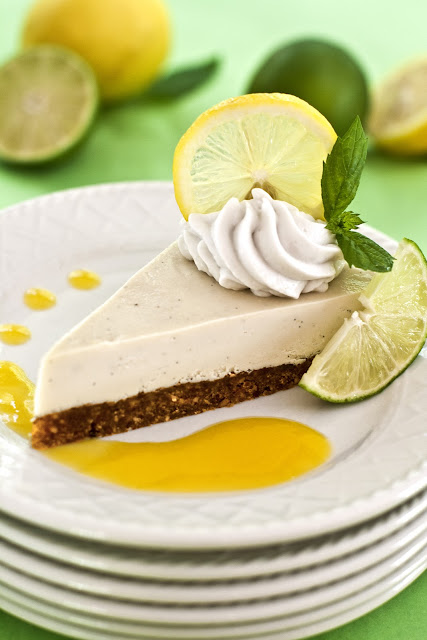 I have been posting new recipes, hosting giveaways, and talking all about leafy greens and ditching dairy - and more! 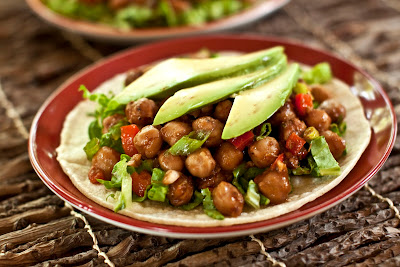 So, jump over and subscribe to Plant-Powered Kitchen.  I will be hosting new giveaways, launching an ebook, and announcing NEW book news very soon - you don't want  to miss all that, right? 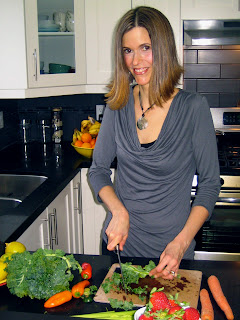 Please link through to my FIRST blog post from my new site.

And, change your bookmarks and other thingamajigs to my NEW blog:

Have you planned your Easter menu yet?  If not, don't fret.  You see, this mama just realized Easter was approaching this weekend.

Yep, I learned when our middle daughter said earlier this week: "Sarah told me that the Easter Bunny comes in 6 days".
I replied: "oh. yes. that's right."...

But my mind was saying: "whaaat, eek!"

After my brief moment of panic, I got a few ideas together for our Easter weekend.  And though I haven't entirely planned my own menu, I thought I'd offer up some lesa-traditional recipes for your own Easter dinner (and possibly my own)!

Why not try my "Avocado & Pinto Bean Enchildas" from eat, drink & be vegan, as a main dish: 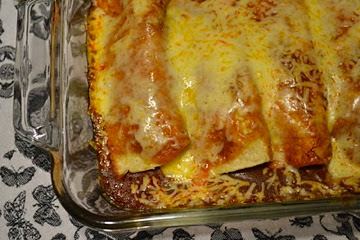 For sides, you could make a simple batch of brown rice or roasted potatoes (or sweet potatoes), along with a salad dressed with "Cumin-Cinnamon Vinaigrette" (also from ed&bv).

For dessert, something easy and light, such as my "Apple-Cherry Crisp" from The Everyday Vegan:
I recently made this crisp with an "Apple-Mango-Pear" adaptation, and it was wonderful: 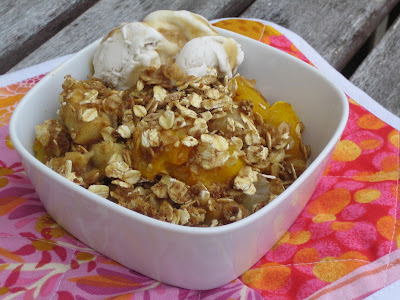 Pair the crisp with a non-dairy vanilla ice cream, and you have a dessert fit to please your crew!

I have posted the recipes for the enchiladas and crisp for you to enjoy this Easter - or anytime.

So, tell me, have you planned your Easter dinner yet?

(p.s. Update on posting the list of edits for LTEV, I will do so and update it in my earlier post.  Check back in a day or two for the link.  Thanks.)
Posted by Dreena 4 comments:

Hello my friends, thank you for hanging in with me for news on the revised printing of Let Them Eat Vegan.

At last, I can tell you that the official release date is May 1st!  Hurrah! 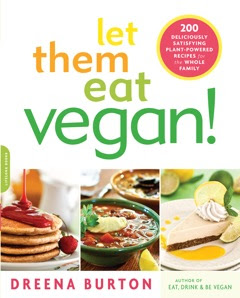 Any one that currently has a copy of LTEV, if you would like to exchange it for the new printing, you will have that option.  You can return it to the place of purchase, as accounts have been made aware and should honor return/replacement requests.

I will be back to announce a new "Buy-On" promotion program and date - if you can just hold on a little longer.

Thank you, and I truly hope to make the wait well worth it.
Posted by Dreena 11 comments:

Last summer I shared a recipe with you for "DJ's Hummus Salad Dressing".  The recipe made its way into Let Them Eat Vegan, and today I decided to remind to make this scrumptious salad dressing through a video:


One note:  I did forget to mention adding dijon mustard to the blend, but as you can see in the recipe, it's there!
p.s.  This recipe was originally titled simply "Hummus Salad Dressing".  I figured since the recipe was inspired by Trader Joe's (TJ's), I would modify the name.  Can you guess what the "J" stands for?  :)
Posted by Dreena 7 comments:

Yesterday was pretty special for me.  I met and talked with Dr. Barnard for the first time!  Let's set the scene, shall we?...

I knew he was coming to town to do a couple of talks, one at Whole Foods.  In fact, I learned about it through my contact (Jill Eckart) with PCRM since I was working on recipes for the April Kickstart program.  As the weekend approached I e-mailed Jill asking if I might be able to grab a few minutes to meet Dr. Barnard before his talk.  I had no idea how busy it might be, and feared I might not get to talk with him at all.  She forwarded my message on to the good doctor.  Later that day I received a note directly from Dr. Barnard saying he would be happy to meet and thanking me for my work on the Kickstart!  (oh happy day!)

So, the whole family got ready to head into the city Sunday after lunch.  We don't live downtown, so it's a bit of a trek with the three kiddos.  But, I wanted everyone there to see his talk, and also - I needed someone to take a picture, ha!

When Neal said to come a little early, I think he meant 5-10 minutes early.  We showed up 45 minutes early!  But that's me.  I freak out if I'm a little late for things, so err on the side of very early.  His talk was at 3pm, and I was pushing us out the door at 1:15.  Well, we used the time to pick up some much-needed groceries.  But, my word, Whole Foods was insanely busy at 2pm!  What you might not know about me is that I greatly dislike shopping (of any kind) at peak times of the day.  Clothes shopping, grocery shopping - anything... I like to get out before noon while it is peaceful.  I enjoy the calm and clarity of open aisles and quiet areas.  Probably because I am so naturally hyped-up that it is too much stimulation to shop when stores and busy and crowded.

We start shopping, but I also zipped off to scout out where Neal would be talking.  What I didn't know was that our 2 1/2 year old was wailing while I was off.  She is a 'mama's girl', so even though hubby and the girls were with her, she bawled.  So, I hung with the family and shopped more until it got closer to 3pm.  But not too close.  (Remember, I must be early.)  So, by 2:40 I was back at the location where Dr. Barnard would be talking.  They were still setting up chairs.  Yes, I was early.

Finally, around 2:50, I see Dr. Barnard making his way through the doors.  Now, I did not know how much time he would have before and after his talk.  So, once he got within a foot of the speaking area, I pounced!  Oh dear, I jumped right in front of him and introduced myself.  I think I might have scared him a little.  I mean, I was just so overexcited!  (And now realizing I had a similar reaction seeing Platinum Blonde go into Hotel Newfoundland after their concert when I was 14. "Crying Over You"!)  This time I'm not (as) embarrassed by my reaction.

Anyhow, we talked very briefly and then I asked for a picture.  Our eldest (who has also been doing my recent YouTube cooking videos) ran up and started snapping.  I think Neal might have felt like he was on the red carpet!  She snapped away.  This one is from her ipod, so a little grainy: 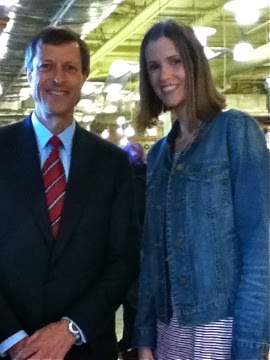 And then, I said "can I get you to sign your book before your talk?".   Again, I didn't know how much time I'd get with him, so I grabbed my well-worn copy of Food for Life for him to sign. 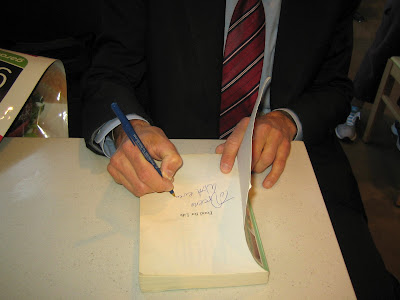 I also brought a new copy of eat, drink & be vegan, since he wrote the foreword to that book.  Again, my little photographer snapped away! 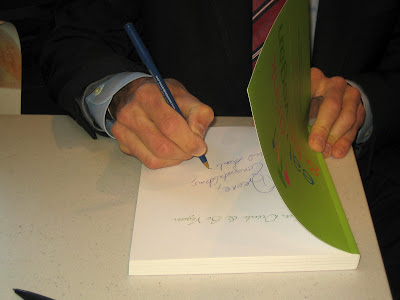 Dr. Barnard looked confused at first when I gave him my cookbook to sign.  But I said "well, it might be my book, but it's your foreword, and I want this one for the vault".  Greedy me. :) 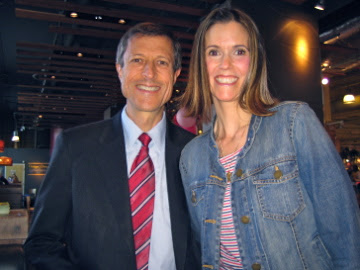 We enjoyed his talk.  He connects with the crowd and relates with personal stories.  One of my favorite stories was him discussing his mother's journey to eating vegan.  He explained how she wasn't making any dietary changes for years, even after he had written 15 books!  He'd talk to her about her cholesterol, and switching to plant-based foods - but nothing.  Until, her own doctor saw some improvements in her cholesterol after she experimented for a few weeks.  And THEN, she was convinced and made permanent changes.  He joked about being the 3rd born child, and so it didn't matter what he said, the message had to come from someone else.  My husband looked at me after and said "Dreena, you only need to write 11 more books to get your mom on board".  Funny.  But, it's true what Dr. Barnard said - sometimes the message has to come from an 'unbiased' source, and usually in a time of personal health crisis. 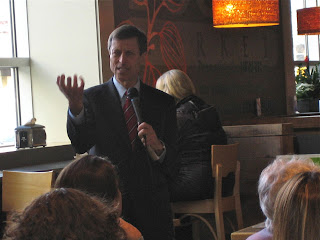 Just before wrapping up his talk, Dr. Barnard introduced me to the audience.  O.M.G. But, here's the best part:  He said "I want to introduce you all to Dreena Burton.  Dreena has some incredible recipes - Dreena, do you have one of your cookbooks there?" (he DID sign ed&bv after all).  But, hubby had taken all our things down to the car, so I didn't have it to show the crowd!  argh!  Never mind, it was such a proud moment for me, I was so overwhelmed I didn't really care about showcasing my books.
I said a brief good-bye to Dr. Barnard, and then allowed other people to talk to him. ;)
What a memorable experience.  I feel so fortunate to connect with him personally after so many years following his work and what PCRM does to promote healthy vegan eating.  For those of you in Vancouver, Dr. Barnard will also be speaking at the Roundhouse Community Centre tonight.  Don't miss your chance to hear him, meet him - and bring out your inner goof!
Posted by Dreena 23 comments:

I haven't posted for a while, because I thought I'd be ready to launch my new website.  With Let Them Eat Vegan in reprint (details soon), I've decided to continue developing the new site.

For now, I'm hanging in with my little blog for just a while longer, and have some exciting news today!
I am now a recipe contributor for PCRM’s 21-Day Kickstart!  My recipes will appear in the Spring Kickstart program, which - kicks off! - on April 2nd.
I am so excited about this opportunity.  From my very early days as a vegan and writing cookbooks I followed PCRM and referred people to their site.  And, Dr. Barnard wrote the foreword to eat, drink & be vegan, for which I will always be grateful.  So, it is an absolute honor and privilege to contribute recipes to their program.  If you aren't familiar with PCRM's Kickstart, link to find out more.
And, speaking of recipes, I just recently added some to my recipes page.  Link through to find Rawesome Nut Dip, Spicoli Burgers, and Lemon Chickpea Lentil Soup.
All plant-powered, all delicious!
Posted by Dreena 11 comments: