As I'm into soups and wraps lately... this is a new soup recipe I am dabbling with. A semi-pureed white bean soup with fresh rosemary and topped with homemade olive oil croutons, a chiffonade(fancy-shmancy term meaning thinly sliced into ribbons) of basil, and a drizzle of good quality olive oil. 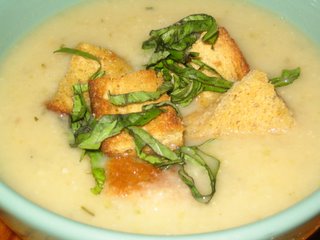 When hubby started eating the soup, he actually "ooohed and ahhhed". Now, my husband is picky. And, a good critic (sometimes too good). He can love his meal and not say a word, until I ask him "so what do you think?"

But, this time, he just about melted eating the soup. I think it was the whole combination. The drizzle of olive oil over the slightly salty croutons that were slowly softening into the mellow-rosemary infused soup, with the occasional burst of fresh basil.

He said "wow, this should be a new recipe". "It is" I replied. (I did tell him I was working on my new book, even though he thinks I'm half mad to do so)! Anyhow, he said "well, you should blog this one - even though I didn't think I would like it looking at it".

Um, thanks?! I guess though because the soup is not bursting with a variety of colors and visible textures, his first impression was not a fabulous one.

Proof that even though we "first eat with our eyes", sometimes you can't judge a soup by it's color!
Posted by Dreena

This looks positively fabulous. Bookmarking this one.

I could really taste this line: "The drizzle of olive oil over the slightly salty croutons that were slowly softening into the mellow-rosemary infused soup, with the occasional burst of fresh basil."

Hurry up with that new book!

So, when are you thinking your book will be done? Any idea what you will be calling it?

The pasta and hummus was actually edible! Just call it my culinary weirdness! HAHAHA

About Mori-Nu...I found a coupon from my vegetarian times magazine from like 1999 or something with no expiration date...it was for their soup! But I can't find it anywhere! Did they discontinue their soups, by chance?

Hi Tom, and thanks. I think there are a few visitors here that will be interested in your tea blog! :)

Ok, Madelyn, you come watch the kidlets so I can get to more cooking! :) I'm half out of my skull to be attempting another book right now I think!

Hi Harmonia! Not sure when it will be out - dependent partly on how fast I can work through things and then when my publisher will want to release it! By the way, that's not culinary weirdness, rather it is culinary creativity... I love it! Whatever floats your boat, right? I have a pasta sauce in Vive that's a little like a very thinned out hummus - the "Pureed Chickpea Pasta Sauce with Fresh Herbs". I like to use beans in other ways than simply whole form, so that's why I created that sauce - so I guess we are a little on the same wavelength with that! :) Re Mori-Nu, I haven't seen their soups... has anyone else??

This looks great. This may pass for kids (I'm sure your kids have no eating "issues"), but kids like white-ish foods and this could be a good one. I will be awaiting this as well as the new book (in which I know will be an awesome one, again).

I haven't had time to post in a while, but your recipes look great! The pudding cups, this soup...yum!!

Dreena, this week you are right up my alley. First the pb cookies, then burrito-style wraps, chocolate anything is to die for and now...this delicious sounding soup. If you ever need an outsider; an impartial tester to do a trial run of some recipes, call me!

Hi Leslie, you'd be surprised with the kids!! My older daughter is actually pretty 'picky', but I am not doing separate foods for her. I expect her not to like *every* veg/fruit, etc (we all have likes/dislikes), but she is trying to show her distastes for quite a lot right now. Very frustrating, but they go through phases, and mealtimes are a great place for them to try and exert their 'power', so it's tough!!

Hi Julie!! Nice to hear from you again... and thanks!! I guess you're gearing up for VegFest now? Just a couple of weeks away... have a great time there! :)

Hey, thanks Carrie!! Glad my posts are 'your thing' this week! I might just take you up on trying out some recipes, it's always helpful to have someone else try things out!

julie hasson said...
This comment has been removed by a blog administrator.
9:24 AM

Yes, gearing up for Vegfest and working on a new cookbook (Pies). But it's all good.

I love checking in to see what you're up to in your kitchen as well. It all looks delish! If only I lived closer to you because that soup looks sooo good!

P.S. I can relate to the picky eating stages with kids. My daughter has always eaten everything (with the exception of oranges and raw tomatoes) and my son has always been the picky one. But as picky as he is with his veggies, he will usually devour spicy Korean or Thai food. Go figure (and they're 15 and 12).

Dreena-
I am literally in AWE right now of the homestyle chocolate chip cookies from Vive I just made--in AWE! They are amazing, and I am so thrilled to have a *wholesome* chocolate chip cookie recipe to make now! I also made the cannellini yam hummus and loved it as well. You are my favorite person today!! Can't wait to make more from Vive!

Amy said...
This comment has been removed by a blog administrator.
6:23 PM

Looks good to me!
I'll eat that anytime!

Amy said...
This comment has been removed by a blog administrator.
6:29 PM

Hey thanks for posting on my site. I appreciate it. I love white beans. It sounds delicious. I will definitely try this one. Me and my little veggie girl will gobble it up I am sure.

Amy said...
This comment has been removed by a blog administrator.
6:30 PM

That's funny, Julie. Wow, I can't believe your children are 12 and 15... that chocolate is faring you well!! :) Wow, a new cookbook, excellent, congrats! By the way, do you do any/many dairy and egg free recipes in your books?

Awww, thanks Ms. Mercedes!! After that glowing comment I think you are my favorite person today! :) :)
So happy to help you find chocolate chip cookie happiness again!

Hi Amy, and welcome! I love your avatar, by the way!

jw...are you getting spammed or something I see a lot of deleted posts?

Also, I attempted a veggie burger last night and will be posting about it soon.

Oh that looks warm and delicious.

Hi Harmonia, no I don't think these were spam, rather simply a couple of people that chose to delete their comments... at least I think so!

Hi,
I just found your blog and I've come right back to the beginning to read all your posts. (I found you 3 days ago and have already ordered Vive Le Vegan and Everyday Vegan).

I have just one question......what's a White Bean? I'm not sure if it's because I'm in the UK, or just because I'm being a bit dense. Any help would be appreciated.

This soup is delicious. I made it with White Tepary Beans, which I totally recommend. I love all of the Rancho Gordo beans. (Their website is http://www.ranchogordo.com if you want to see all of their gorgeous heirloom beans.) Thank for your newest book, I am digging it. I can't wait to make some hummuses. Hummusi?