Well.  I'm just coming up from air after a long week edits for the new book.  It's a big book, lots of recipes, and some informational sections too, so there was much to cover.  I felt like I was working two full-time jobs these last two weeks.  Working from home is challenging because there is never a distinct separation from the home, some of you might relate.  Anyhow, I'm just trying to swing back to everything now, and am a little late with this fourth and final post for Vegan MOFO with Vegan Mainstream. 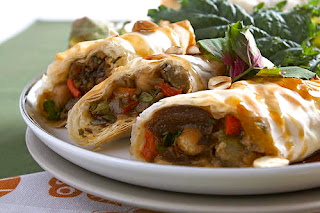 With this MOFO series, I chose to feature beans as a theme.  I love creating recipes using beans.  If you're not eating beans every day, you're missing out!  Trouble is, beans have a stigma for many, considered lowly and largely uninteresting.  I'm trying to change that perception.  And, for this last MOFO post, I share a recipe from eat, drink & be vegan to show the sophisticated side of beans.  They aren't just for chili and hummus.  Not that I don't love hummus.  Or chili.  Mostly hummus.  But, I really love this ed&bv recipe, go make it.
Posted by Dreena

Beans, not interesting?? So funny....I try to go raw every once and awhile and I totally find myself having bean fantasies. I never think about them when they are part of my daily life, but take them away and I seriously crave them!!! Love that they are cheap, zero cholesterol, and just the perfect food. They are so beautiful as well!

with you, I love beans and don't think I could ever go 100% raw for that reason, that and hot soups. Bean fantasies, that's a first, funny! :)

dreena, i loved this recipe!...i just made it today...i made everything per your recipe--i couldn;t believe how i had everything including an extra fennel bulb that my husband did not use for a fennel salad he made on sunday
a couple things i did different was add about a cup of butternut squash sitting in the fridge, and pre-soak my over dried apricots--ok, apricots then turned into a spread, but incoporated well into the dish anyway...i had basil as well...i am telling 100% kismet down to one red, yellow and orange bell pepper that i just bought...

at first i was not sure how the balsamic sauce would pair with the dish, but oh my, amazing, amazing addition!...i highly recommend that no one skips out on this--the sauce really makes the dish, even though there are many flavors that stand only in the moroccan phyllo rolls...

oh, excellent Eva!!! This is one of my all-time fave recipes, I love the warm spices and the crispy phyllo, and sweet/sour sauce. Good call on the butternut squash. I just roasted some last night with onion and sweet potato, and made a pasta casserole with it. It's just so soothing this time of year! And, it naturally pairs with those spices in the rolls. Don't you love it when everything you need for a dish is *right* at your fingertips. You were meant to make that dish yesterday!! And, you might find yourself sneaking that sauce on to other foods... it's strangely addictive! Thanks much Eva for sharing. :) :)