In The Kitchen with... Veggiegirl!

My adoptee has been busy in the kitchen with her vegan creations these past few months, hasn't she?

So, as part of the adopt-a-blogger event, I sported my baking garb and got prepped to make her "S'mores Muffins", since I knew our girls would love them with the little bits of vegan marshmallows tucked inside!

The recipe was a cinch. These muffins came together in about 10-15 minutes (and that's with my 3 yr old part of the scene and us working on a puzzle during the prepping)! 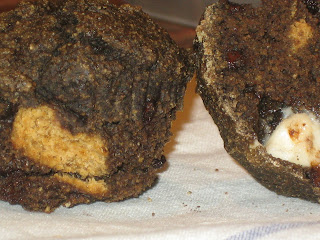 I made 9 muffins from this batch, which took just a little longer than Liz's 15-18 minutes (roughly 19-20 mins)... but then Liz's yield was for 10-12 muffins, so the longer baking time fits just right with the larger muffins!

I followed Liz's recipe pretty much to the letter, but with these slight modifications:
- used w/w pastry flour instead of w/w flour; just for a lighter texture
- used roasted cocoa powder (I wasn't sure if Liz used raw or roasted, but since roasted powder is darker and similar to cocoa powder in color, I chose the roasted)
- used combo of chocolate almond milk and plain soy milk for the 1 cup of non-dairy milk measure (since I had both opened in my fridge)
- used non-dairy chocolate chips instead of carob chips

The only other thing I did was add 1/4 tsp of sea salt to the dry ingredients. Adding a touch of salt to baked goods enhances the flavors of the other ingredients, so I always add about 1/4 tsp to a batch of muffins of this quantity, or a quick bread, or a small batch of cookies, etc.

The muffins baked up nicely and rose well. Though the name might sound like a cupcake, these are definitely muffins and are not at all that sweet. Since there is plenty of sweetness from the added chocolate chips, graham crackers, and marshmallows, Liz was wise not to overdo the amount of unrefined sugar, though I think 1/3 cup would work equally well as 1/4 cup if you wanted a muffin that's just a touch sweeter (I don't care for overly sweet muffins, but I know some of you enjoy them on the sweeter side).

Liz didn't add any oil to her recipe (I think because she often bakes low-fat treats for her family), and used some applesauce as a fat replacer to add moistness to the batter. This worked well, though if I can give Liz, my 'adoptee', one small suggestion from her adopting veg blogger, it would be to include a small amount (1-2 tbsp) of an organic canola, coconut (warm to melt first), or other high-quality vegetable oil to the wet ingredients. It enhances the moistness in baked goods, and also, since fat is a flavor carrier (ex: just think how tasty deep fried foods are), that bit of oil will heighten the other flavors in the batter.

Kudos to you Liz for your vegan culinary interests and achievements - especially as the young and relatively new vegan you are! Keep the recipe testing going, veggiegirl, and we all look forward to what you cook up next!

p.s. as a little 'surprise' to you, Liz as being part of this adopt-a-blogger event, I will be mailing you a copy of the "Everyday Dish" dvd. Since you already have my cookbooks, I thought some vegan cooking on tv might be in order. Hope you enjoy it!
Posted by Dreena

Dreena, your batch of the S'mores muffins turned out PERFECTLY!! and thank you for the ingredient suggestions - I will try those tips, for sure!

And wow, I'm positively shocked and overjoyed for the "Everyday Dish" DVD!!! I own every single one of your cookbooks, so the DVD will for sure complete the collection - whoo hoo!! Dreena, thank you so much - hooray for great "adopters" :0)

By the way, I tried a new cookie recipe of yours from 'Vive Le Vegan' (well, new to me, because I had never tried the recipe before, haha) - the results were stellar!! I will be blogging about it next Monday :0)

what an interesting event! I would love it if a talented baker would show me the ropes, not just how to follow recipes, but how to create recipes from scratch- fun!

I am loving the camaraderie almost as much as I am loving the muffins. I hate to generalize, but one thing I will say about vegans is that we [generally speaking, of course ;)] are an open and sharing group. So sweet of you to share your vegan diva expertise with Veggie Girl--and the rest of us, for that matter.

Kudos to you Dreena--and to Veggie Girl, for her fabulous inventive muffins. [Sp young and so smart.]

Ooh these look delicious, thank you veggiegirl and Dreena!

I just wanted to say that you have inspired me to go vegan! I already have all of your cookbooks, but I am now making the change from veggie to vegan, and you make it look very possible!

Veggiegirl, you are totally welcome... you have become our lil' vegan sweetheart and you deserve the treat for all the goodness you share.

hauntat, congratulations on making the 'leap' from vegetarian to vegan!! Hooray for you! You'll find lots of support through the blogs, and I think you'll find it's easier than you may have thought it would be to ditch the cheese/milk/eggs. Pls drop me a note here or by e-mail anytime you have questions along your vegan journey. Have fun!

That's awesome. I wish I had a chef to guide me! haha For now, I will continue to follow these wonderful posts. :)