Not my first visit to McD's, no I've been there quite a few times (unfortunately).  Growing up and into my teens, you bet I got my fix through those greasy golden arches.  But, our three daughters have never been to McDonald's - until last night. 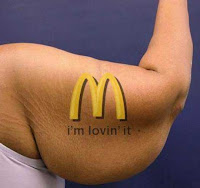 Our eldest daughter had a hockey game about 1 1/2 hrs away.  My husband is one of the coaches, so normally he takes her, but he was tied up in a hearing.  Thankfully, she caught a ride with the other coach along with three girls.  They were so ecstatic!  One van with four girls pumped for one of the biggest games of their season!

Hubby met up with them at the rink, and they had their game.  But, the talk on the drive home between dad and daughter was not so much about the game, but rather the trip to McDonald's.  I knew the other girls would all be having something to eat on the drive, so I had packed a lunch for our daughter, and also some cupcakes and cookies for the other girls (and the coach... I say thanks with cookies)!

I didn't know the other girls would be stopping at McD's for their snacks (though it certainly didn't bother me that they did).  But, here's the thing, this was our girl's first step through those doors (because, when else would she have been there?) and it was not what she had imagined.  From some of the ads she's seen, I think she was expecting to find a carnival in there!  She said "it's just like a little restaurant, and the menus are up on the wall, and there's just these little tables... there's nothing going on there, and there were no clowns anywhere!"  Oh, I laughed!!  It was funny to hear her reaction once that perception met reality, and that it wasn't the cool thing she thought it might be.

She did, however, bring home a toy.  They get them with those toys, huh?  It's all in the marketing, as we know.  Get those kids while they're young, hook 'em with 'fun' meals and toys and catchy commercials.  But, if you wait long enough, your kids might just be as underwhelmed as our daughter, and have no interest in the food - the toy maybe - but not the food.  Hurrah!

And, that reminds me, this is a commercial that should really get more airtime... yep, this is what should be hooking us...

That is great! I love that your daughter was unimpressed by McDonalds! It is all about the toys there, big time. You are such a good momma, knowing that your kids won't be raised addicted to that crap.

I too love that your daughter was unimpressed. I also love the photo of the "I'm Loving It" morbidly obese arm. But I'm the kind of grrl who enjoys ironic humor ;-)
(Maddy who for some reason has been totally become a persona non grata with all things Google)

Oh right on!
I'm a psychology professor and we were recently talking about eating motivation and how for this generation of college students, part of the allure is the "fod childhood memories" of these fast food places...
Sad, time to break the cycle!!
:)

It's great that she was unimpressed--the commercials they make for McDonald's are obviously so targeted at children. It's sad. Unfortunately I know many people who took their kids to McDonald's when they were too young to understand. Now those kids think of McDonald's as this great awesome place where they always get their toys..Children don't whine to their parents to go to McDonald's for a hamburger!

Anyway, it's awesome that she came back saying that. :)

This reminds me of something that happened a couple of years ago. My then 5 year old came home from playing with a neighbor and asked me if we could go to McDonald's sometime. I asked him why and he said that his neighbor got a cool toy with his meal there. I explained that they don't really have anything vegetarian to eat. That night at dinner, he suddenly ran from the table to his room, and came back and set a toy on his plate. He said, "look mom, it's just like McDonald's!"

How interesting to see it through your daughter's eyes! I think the fact she mentioned there were no clown's was hilarious! I am not a McDonalds fan myself but my husband is. He has taken my daughter to the playarea a couple times. She loved that! The food, he said, not so much. :)

Glad to hear your daughter was unimpressed with McD's. I took my daughte there when she was little. It was before I knew any better. Fortunately we've both come a long way since then. Love the commercial.

As a kid, we hardly ate fast food either. I don't think my parents ever took me to McDonalds, I only went for other kids parties or outings. By the time I was 15 I'd had KFC about 5 times!!

I used to love the stuff though!

Great story- you must be proud! When we were kids our parents never took us to McDonalds and really tried to impress healthy eating on us. Of course I have been there since- as a teenager it was hard to resist going with friends even with those healthy messages behind me. My Dad has still never been to a McDonalds in his life- and he is 58 years old!

Love the sagging bicep and the video.
Yeah on raising your girls to be SuperWomen!!

When I was growing up in a small town in Kentucky, our local McDonald's had an agreement with our elementary school and anyone who got all As on their six week report card could go to McDonald's, show the card and receive a free Happy Meal as a reward. How messed up is that? I grew up thinking that you go to McDonald's to treat/reward yourself.

McDonald's is clever. I can't possible believe that people eating there regularly think it's okay. They must put crack in their food though because I remember when I used to eat McDonald's it only made me want it more. Gross.
I posted an article on my blog by Mayim Bialik about why she is a vegan. You might like it. Glad to find your blog, great stuff!

Wouldn't it be nice if most children had your daughters response to McDonalds! Your story reminds me of my daughters first visit to McDonalds when she was 4 years old. Some nursery school buddies and their moms had invited us. After lunch, my daughter asked, "Mom, what were those yellow sticks?!".

P.S. My daughter is now 19, a vegan, and she's the one who introduced me to your fabulous cookbooks.

The video with the corpse with food in his hand is hilarious!! I used to work with the dead, and it reminded me of this gentleman of about 350-400lbs who died of choking to death. He was 42. The remnants of his meal were still adhered to his lips when he was brought in.

That is wonderful! My mom and grandma keep trying to tell me that mcdonald's is such a great place to eat, they really have healthy food, and they do so many good things ... I still hold strong to my position that the only time my family and I go there is to pee during long road trips. ;)