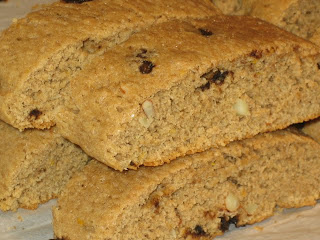 For some reason these past couple of weeks I've been recharged with my recipe testing.  Not that I wasn't doing any testing in the weeks or months prior, but lately I feel jazzed to test more than one recipe a day.  Believe me, with the three kidlets this isn't always easy - or sensible.  (My good friends know that I bake at the worst of times, I "bake away my stress"!)

And, there's an excitement that I have about trying a recipe, seeing it work out, and retesting, retesting, and finishing it off - YES!  I've been charging through a couple of biscotti recipes.  One I'm still tweaking, and the other, this Orange Almond Chip Biscotti is clued up nicely.  I think! 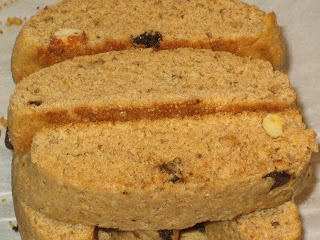 I say "I think", because I can always retest and retest recipes.  I have a hard time not testing it "one more time" just to be sure, or to try a variation in flavor or texture or to make without gluten, or soy, or something else.  Yadda yadda.

Sometimes I just have to say "enough".  So, I think with this Orange Almond Chip Biscotti, it's just right.  Enough.

By any number of measures, America’s health is failing. We spend far more, per capita, on health care than any other society in the world, and yet two thirds of Americans are overweight, and over 15 million Americans have diabetes, a number that has been rising rapidly. We fall prey to heart disease as often as we did thirty years ago, and the War on Cancer, launched in the 1970’s, has been a miserable failure. Half of Americans have a health problem that requires taking a prescription drug every week, and over 100 million Americans have high cholesterol.  (Source: The China Study

Dreena,
I'm sure your commitment to testing those recipes is why they are so fantastically fail-proof. When I need a recipe for treats to share as a gift I always turn to you. I have hundreds of cookbooks but I know when it is one of your recipes the results will be perfect. Thank you for the dedication you bring to your craft.

That looks amazing.. I bake away my stress as well! :) Great way to relieve the stress.

Lisa, I've gotta tell you, that is just a precious thing to read. Thank you ever so much. (and here I just thought I was just 'ocd' with my recipes - well, I probably am) xo back

Allison, if only there weren't the dishes to clean after, right? I'd probably bake all day!

Yep, this is why your recipes are always fool-proof! Yours are my go-to books (especially for cookies!) Thanks!

Yeah, like everyone else said, you're obviously doing a pretty good job testing because your cookbooks are all almost flawless! Keep up the good work! I think I'm gonna make that choc/PB/banana pie when I'm home for spring break with my fam! <3

Is there a way to subscribe to your blog posts via email? I own one of your books and LOVE it!

My sincere thanks for those comments.

Kat, that's a good question! I have it set up on my blog so you can follow my blog. Anyone that can share another way for me to set that up? I don't keep on top of this techie stuff very well!!

I’d like to personally invite you to join the CookEatShare Author network. CookEatShare has had over 2.5 million unique visitors in 2009, and I think they will be interested in your content. Users will be guided to your actual blog, so this is a free way to increase page views and visitors to your site.

Is that orange almond chip biscotti recipe anywhere? gotta have it. I'm set to make another batch of those super energy cookies from EDBV tonight as they are the VERY best cookies no contest.